Getting Unity 3D working with Git on Windows

December 17, 2013
Git is a brilliant, yet peculiar beast. It has the most flexibility of any of the VCS's I've used, and it's extremely powerful and quick once you get used to how it works. Suffice to say that I've fallen in love with it over the past year, for both personal and commercial projects, and online services like github and bitbucket just enhance the overall appeal of it. I therefore want to use it as my VCS of choice when developing games... but those who have tried to get Unity and git working together will probably either be dead by their own hand, or crouched in a corner, rocking back and forth in the foetal position.

Unity3D is an entirely different, and possibly more peculiar beast. It's a great tool, and the editor is feature rich, but it's source control compatibility is weak to say the least. I don't know if this is through necessity, or the marketing people at Unity have pressed the developers to make it as complicated as possible in order to sell their Asset Server control system. The complexity is mostly due to the fact that the Unity editor serializes most assets into binary by default, and git - by it's very nature - is built to compare textual files. In addition, Unity3D creates a shed load of files that should not be version controlled (such as its asset cache), and the Visual Studio / MonoDevelop solution and project files change constantly.

I spent the good part of a couple of weeks getting Git and Unity3D playing nice together, but, because I'm not currently collaborating with other developers I'm still not 100% convinced that Unity3D and git are suited to each other yet. Regardless, it's very handy for me at the moment, so here's how I've implemented my git repo for Subnet, my upcoming First Person stealth and parkour game.

This tutorial is for Unity Pro 4.1.5f, which - at the time of writing - is a little bit out of date, but I believe Unity have recently made a number of pro only features available in the indie version as well (such as asset serialization), so you should be able to follow this for any of the later versions. Unity have provided a tutorial on how to integrate with VCS's, but (as with pretty much all of the Unity documentation) it's not great.

Open up your Unity project and go to Edit -> Project Settings -> Editor:

This will open the Editor Settings in the Inspector. Here you should set "Version Control -> Mode" to "Meta Files" and "Asset Serialization -> Mode" to "Force Text". 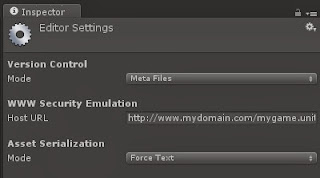 The "Meta Files" option will run through your entire Assets folder and generate a text based .meta file for each file and folder contained within. This file holds some internal Unity data, such as identifiers, version numbers and import settings. You will not need to manually interact with these files, unless you start moving assets around outside of the Unity Editor.

The "Force Text" setting will force relevant assets to serialize as YAML. This allows git to compare changes to editor settings, such as the assets location and scale. It's not brilliant (sometimes even changing a single setting in a prefab might regenerate the entire file), but it's about as good as you're going to get.

That's it for Unity Editor settings. The only other thing to mention is that you should always move files around within Unity Editor, rather than on your file system, unless you know exactly what you're doing, otherwise you might break physical references to your assets that can be difficult to resolve, especially if you have a lot of references set up to the moved asset within Unity.

My git repository has my Unity project inside it, as well as a number of standard Visual Studio solutions and projects that I use for creating some shared and unit tested code. I tend to set up the following directory structure:


I also set up a .gitignore file in the root of my repository containing the following patterns:

The last three entries are project specific; "*.subnet" is the extension I have applied to my serialized Save Game files, and the other two lines are direct links to the generated Unity solution files. You don't have to be explicit here; if you don't have any .sln files in your repo that are external to the Unity directory (which I do), then you should just add "*.sln" to the list at the top.

A lot of the ignore patterns are pretty standard when using git with .Net repositories, but .Net developers paying attention might wonder why I'm also excluding .sln, .csproj and .unityproj files from the repo. This is because they are recreated every single time you modify the Project structure within the Unity Editor. Different versions of Unity also create slightly different versions of these files, meaning that if you're collaborating with someone who has a different version of Unity than you, these files will be constantly updated as you both commit to the repo, even if you don't change anything in the project structure. Because Unity Editor manages the creation of these files, you don't need to worry about them - anyone cloning the repo will generate their own version of the project and solution files as soon as they open up Unity.

This raises another "gotcha". You cannot add projects to the Unity Visual Studio / MonoDevelop solution, as they will be automatically removed next time you change a file inside Unity. This is why I have a separate solution containing any shared code - so Unity doesn't screw up my references and project links constantly!

Also notice that the Library, obj and Temp directories are excluded from the repo. Again, Unity generates these directories whenever you open the editor or build the solution - they are local cache directories that each collaborator will have a local copy of. They're full of binary files, and can get absolutely HUGE. The more assets you have, the larger these directories will become.

Lastly, but possibly most importantly, is the .gitattributes file. This controls the line endings that git applies to each file type when you check files in and out. If I remember correctly, Unity applies LF line endings to most files by default, which can confuse things (and present you with a lot of laborious popups in the various editors you might use) on a Windows machine. I found a template somewhere online (which I can't find again - please let me know if this if your file so I can credit you), but it still took me a while to get everything working to an acceptable level. I'm still not 100% convinced that this list is comprehensive, but it's a damn good start:

You can read more about .gitattributes here.

In Notepad++ it's as simple as opening all the files at once, and replacing "\n" with "\r\n" In All Open Documents.

There's not much point of me providing these files for you, as it's possible they could be different in each version of Unity, and you might have already modified them yourself.

As I said, I'm not 100% convinced this approach will work for everyone, and I'm still very nervous about two people modifying a single Unity scene or prefab file at the same time (I had numerous issues last time I collaborated), but it's about as close as anyone's going to get, I think.
Development git SourceControl Unity3D

Popular posts from this blog

January 19, 2012
I'm currently in the process of writing my next personal project,  RustyShark  in .Net MVC3. It's a game and films review site, and will hopefully generate a bit of a community. Each review on the website has a comments form at the bottom that readers can use to post their own mini review, or just a simple comment. I'm using unobtrusive client side validation, but (as it should) the validation also occurs on the server side. This means that the user could potentially receive an error message on the comments form after a post-back but not notice it, as they will be redirected to the top of the page, rather than the comments form. The "read review" page is accessed via the fairly standard route /Reviews/Read/{titleURL}, which means the reviews controller exposes the Read action method. The Read method has a single override which is tagged with the [HttpPost] attribute as follows: public class ReviewsController : Controller { public ActionResult R
Read more

Deleting All PlayerPrefs for your Unity3D Project on Windows

January 09, 2015
As a Unity3D developer you'll eventually find yourself wanting to delete the PlayerPrefs for a particular project on a regular basis. I've been recently using PlayerPrefs to store player settings like FOV, mouse sensitivity and acceleration, and I wanted to make sure that my code will run on a freshly installed machine as well as my development box. If you click the  link above , you'll see that all PlayerPrefs are stored in the registry - for a Windows machine at least. So, instead of writing some delete-later code to run PlayerPrefs.DeleteAll(), you can just create a simple registry file that you can click on whenever you want to clean up your machine. All you need to do is prefix the registry key of your project with a dash (-), and run the file. Below is a sample file for Windows 8.1 - you'll need to alter the Registry Editor version at the top of the file if you're using any other version of Windows, but it should still work: Windows Registry Editor Versi
Read more

Chris is a Software Architect with around two decades of experience developing software in many different industries. He is versed in the .Net Framework, SQL Server and many other technologies.